TMIT: THE STRANGER BY ALBERT CAMUS 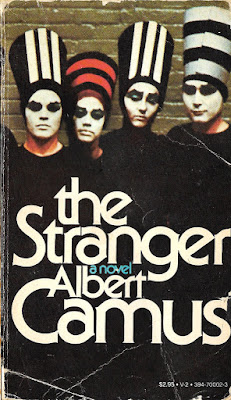 Berkeley vibes, where you dip your paperback in your morning coffee. and by morning we mean 4AM.
1. if you had to lick a stranger's sweaty armpit everyday for the rest of your life to save the life of your significant other would you do it? (thank you Master of None)
yes if the stranger is Roger Federer. i mean do you see him just now out there on that sweaty French Open court? i mean i thought he would lose in the first round nobody has seen him IN 5 YEARS!!! not even his wife.
Roger Federer is not like us, his armpits smell of lilac brush. he's a very reasonable kidnapper, he sits down with his captives and has coffee with them. Swiss coffee, which is just melted chocolate.
2. what is something you escaped from?
Tom Cruise. he wasn't expecting me to give him a Spider-Man kiss on the way up the zipline as he was coming down the zipline.
3. have you ever done an Escape Room game with strangers? did you solve it and get out in time?
three times. with "Strangelove" by Depeche Mode playing in the background. once on Bob's Burgers, once on Clue. and then there was that fateful time i went with Janeane Garofalo when we were still dating and hot 'n' heavy but that was the event that triggered our breakup. so many embarrassing things happened that night, things we can never take back. i see peglegs in a whole new light. when it was all over i lost my woman to the vagaries of Hollywood but i gained a newfound appreciation for all those actors and actresses forever nameless toiling away at the Universal Studios giftshop and dinner theatre in vests.
4. what is the strangest/craziest DM you have ever received?
Tom Arnold
5. do you DM strangers? why?
the only way to make friends
6. do you watch Stranger Things on Netflix?
no but i just finished watching Mermaids so i saw the mother's childhood
CLICK HERE FOR TMI TUESDAY
Posted by the late phoenix at 12:00 PM

My head is spinning, my mind overly thinking a lot about what I just read.

and Mermaids! you must watch Mermaids!

I find myself strangely fixated on what Tom Arnold's DM said.

doodle: Tom Arnold was part of the original Resistance