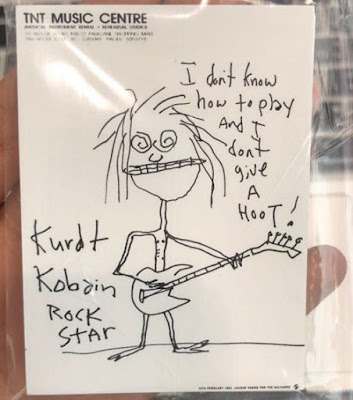 notes:
* at the Friends Reunion:
Matthew Perry: the reason i can't talk is i got emergency dental surgery literally two minutes before this thing was taped. i'm not slurring my words, i ain't no drunk.
Phoenix: yeah i know what that's like, my tooths have been the bane of my existence since my baby teeth.
Matthew Perry: i had this all through the run, i got major anxiety when my lines didn't land a laugh, i would start to flopsweat on my brow from flopping and i peed green right there in my pants.
Lisa Kudrow: only i knew about this, hence the inspiration for "Smelly Cat".
Matthew Perry: i'm being treated for GAD and general Joker craziness at the Betty Ford Clinic.
Phoenix: i have anxiety, too, but instead of drinking i just die.
Dirg: does getting a vaccine make a man emotional?
* i have one of those silver tenderizers from the '80s, still do, it survived, it has spikes in it like the movie Pinhead. more dangerous than a hammer, more dangerous than a gun.
* the princess from Princess and the Pea gets a Better Bedder:
Princess: i can tuck the pea in the side now. i tuck also my remote, my mascara, and my lover's penis in the side-pocket, daddy taught me that...
* the Blue Buffalo lady i recognize her!.........from some adult swim short or some '80s series with a doctor, a lawyer, or a cabbie eating cabbage.
* Doryce: what do you do when your tow-man locks his keys in his tow truck? tow his penis...
* the Spanish Shriners boy looks like the English Shriners boy but leaner and less enthusiastic about the towel.
Dirg: no street tacos are lean-beef tacos.
* Takahashi: the BTS meal does NOT include Mulan Sauce, Dirg!
* woman from the Dr. Pepper Threesome Space Team: we are not doomsday preppers. since i'm a woman scientist the only thing that defines me is all the stalkers i've had as boyfriends. the two men on the team wanted to experiment with me in the lab and i forced them out the airlock.
* Santa's only language is magic
* Nesquik Bunny: are you a farmer?
DK Metcalf: i'm vegan. i hurt my legs running to the Olympics to hardcore punk. when you entranced, Nesquik Bunny, i thought you were a brown dinosaur.
Nesquik Bunny: are you a DJ?
DK: you dumb.
Nesquik Bunny: drinking just milk with no orange juice makes one dumb.
DK: don't be flashing that bunny-sign in South Central unless you want to be venison.
* Prince Harry: do you see me? i'm trying out to be a professional wrestler, they're the only ones with true freedom of speech.
* Herve Villechaize: would you rather be ugly and free from mental illness or the reverse? the Hunchback of Notre Dame tragically grappled with this his short life.
CLICK HERE AND HAVE FUN BROWSING YOUR LIFE AWAY
happy weekend, my babies
TOMORROW:
Denny's, for the Nashville Hot Chicken. we've been waiting years for it to be indoors again and i'm gonna go in there and get it to go...
okay i don't know about you but what i need right now is a Coke float, Tostitos strips, a big bowl of queso dip, a medium powdered donut, and a spa. know any local spas.........in Hawaii? one of those volcano-fed spas...
Posted by the late phoenix at 3:13 PM