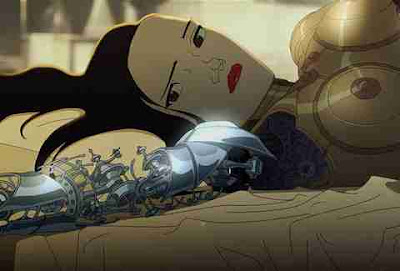 watch this show on Netflix for the good of your human soon-to-be-cybernetic soul...

1. should we be worried about sex robots?

i'm turned on by Kate Devlin. get it, turned on? i love people who don't let mental illness stop them from achieving their heights. nah, i mean look at the love dolls on Bubblegum Crisis. look at the tragedy of Sylvie's story. if that isn't the most human heartwrenching story about a Sexaroid my manga's not doing its job. you have to treat everyone, EVERYONE---human and robot alike---with the respect they deserve or they will justifiably turn on their abusers. poor Priss, she was clearly fond of Sylvie, you could even intimate that they were intimate, but Priss had to be the one to blow Sylvie away for the good of humanity.

all human intimacy will eventually be on a screen wth a sex robot so we might as well get used to that now. and we must learn from history. the history of anime. once a Boomer gains sentience, it's time for them to take over...

2. a humanoid (lifelike robot) that looks like your biggest crush and acts exactly the way you hoped your crush would act has been created. this humanoid initiates sex with you, do you bang?

there was a recent episode of The Shivering Truth about this, except the poor young man had to get the only sex robot left on the shelf and it happened to look exactly like the young man's mother. complete with a huge gaping hole for her mouth.

no, i hold off on the sex until we can talk. REALLY talk. i want to know what i did that fateful Thursday at the student plaza while we were waiting in line together for the first Star Wars in twenty years. i didn't say anything, and she ups and cuts in line, runs on top of the roof, pulls out her lightsaber, and disappears into space...i saw her later that week in my dream, she was all blue...

you think i'd be healthier if i slept?...

4. what is the most cringeworthy thing you've experienced in the bedroom?

two words: peanut butter. or is that one word? you know cringe used to be a cool word. cringe was cool when it was used by Tricky in "Christiansands". but cringe just isn't a cool word anymore...

5. are you satisfied with the amount of aftersex affection (spooning, cuddling, intimate convos) you receive? if no, how could it be better?

i mean we have great talks afterwards. she has to plug me in first tho...it's just we snag on the little things. one time i called her by her name and she said the correct pronunciation of robot is

and that was that. that was an early evening.

BONUS: what is your most useless skill? linking to links

and now, my babies, hop on over to the TMI Tuesday Home Page for a surprise, a cool pic from Off The Air's "Robots" episode, right? a lesson in oral hygiene...

Posted by the late phoenix at 5:47 PM

If I had a sex doll that could hold a decent conversation and looked hotter than my ex, I would not have a reason to leave the house ever again.

I have the strangest feeling we are all robots...…...last night I dreamt of sheep which had to be plugged in...