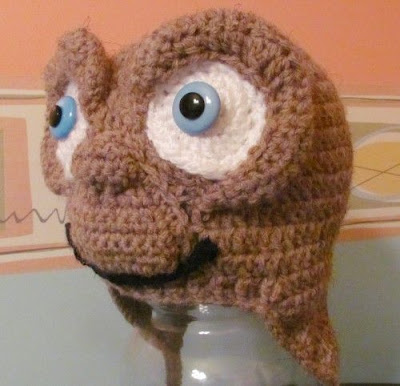 * seriously, this would have made a great E.T. 2. but there's also the school of thought that E.T. was one of those perfect films which needs no sequel and in fact the sequel would just tarnish the original. don't mess with perfection. this is always tricky for me. cos if something is SO good, you want more of it, right? but i also understand LESS IS MORE. this is what it means to live as a human in this reality of duality.

* yeah but maybe, you could expand this 5-minute longform commercial and make it a kind of short that could appear on PBS's Imagemakers sometime. just a thought. online-only of course, streaming.

* i remember my first poof. that is, my first knit cap. it had a poof on the top of it. it kept my head warm. it was also unbeknownst to me the first sort of commercial thing i owned. well my parents bought for me. they were hawking these caps along with mugs but no muggings outside the street where i saw my first film---E.T.. i still have this knit cap, has ET.'s smiling face on the Naruto forehead, rainbow-colored but mostly reds and blues, and it still swallows up my small pointy head. it smells like the '80s. god, i mean i was just a kid but i was in the midst of the Renaissance of Culture, i mean frickin' E.T. was my first movie!!! i was one lucky boy!!!

* and yes, i broke my arm the first time riding my bike pretending to be Elliott

* not the Home Alone house

* wife: honey, i told you not to move the family to the X-Files Canadian woods from the early seasons!

* train, you are free to cross! there's no one around cos trains don't exist anymore!
doll: in the '80s a doll could have red hair and it wasn't deemed evil. as long as it was made of straw or wicker...

* Elliott: you got a bowl of icewater, making spaghetti?
wife: no, i'm gonna get this tattoo removed, it's of a certain leader...

* got my gun i mean my flashlight

* girl: remember when the Colts were good? remember when you could still win goldfish at the county faire?
E.T.: Pepperidge Farm remembers, i mean the '80s remembers...
boy: THAT'S NOT A SNOWMAN!!! IT HAS WEIRD ALIEN HANDS, NOT CARROTS!!! WE DON'T EAT CARROTS IN THIS HOUSEHOLD, THIS FAMILY SURVIVES ON THREE SQUARE MEALS CONSISITNG SOLELY OF REESE'S PEANUT BUTTER CUPS!!!

* E.T.: fuck, kids, you scared me. remember, they're more scared of you than you are of it. don't they teach you that at Steve Irwin Academy?
kids: you really freaked us out!
E.T.: i know i know, people say my teeth are really creepy. but think about when that alien from Close Encounters smiled at the humans, i mean that was creepy, right? how would you know if you're a human that the alien would smile just like a human!!? but what creeps me out is that i don't have a glowing heart in my chest anymore...

* E.T.: Elliott?
kids: so that's our dad's name...
E.T.: ELLIOTT! i learned to spell your name correctly! the gangsta way with two Ls and two Ts! how are you, you shit bastard! give your old friend a tongue-lick. wow, i hardly recognize you, you've changed so much.
Elliott: yeah, i started wearing grunge plaid during the '90s...that music helped me get through the pain of you leaving me...

* girl: coulda introduced your daughter first, dad.
wife: so this is who you're having an affair with?

* Elliott: i missed you, Bug Eyes! right after you left i broke my arm for the first time cos i tried to fly my bike as always. i've had a love-hate relationship with the full moon ever since.
E.T.: yeah i'm not liable for that, kid.
Elliott: wanna continue that painting you did in the '80s? the easel and pad are right there.
E.T.: you couldn't do art for shit. no thanks, you can't paint nudes anymore in this culture.

* Elliott: a lot's changed since you don't come round here no more.
E.T.: what? the internet? we had the internet on my planet 5000 years ago, it caused the fall of our civilization.
Elliott: what happened?
E.T.: we got in a neverending war with Alf's species over cat videos.

* boy: it's called the internet, i don't understand how it works, makes my head explode.
E.T.: i'll show you how the internet works, bitch. i mean boy. sorry, preparing for the trolls. come with me to your sister's room, let's do some drugs from my homeworld. you know i've had my head actually explode before...

* Elliott: how'd you get lost the first time, E.T.?
E.T.: i took a wrong turn and your fucking planet Pluto got in my way, so i blew it to smithereens...

* girl: mom, E.T. is eating cupcakes for dinner again! i don't have to eat my greens!
wife: what a missed opportunity! imagine if E.T had promoted broccoli instead of candy in the '80s...

* girl: when do i get my E.T. knit cap with the poof on the tail as my Christmas gift?

* Elliott: which holiday classic do you want to see, E.T.? Elf or The Polar Express?
E.T.: there's only one answer to that question.
Elliott: don't be alarmed, don't be scared. but some FBI agents will be coming over later this afternoon, the neighbors are looking through our windows and seeing you on our couch...
E.T.: Elliott, Bing Crosby is making me feel things...…...down there...

* Elliott: wanna brush your teeth, bud?
E.T.: not now.
Elliott: is that hologram of your home and mom?
E.T.: my planet was destroyed by global warming.
Elliott: it's a lesson for us.
E.T.: not really. your planet is doomed, you waited too long to fix things.
Elliott: you know, your design is so kid-friendly. with the giraffe neck and head shaped like a baby-grand-piano, your god is a wondrous god. i never realized the first time, but you have the most beautiful big blue eyes!
E.T.: not now, bud.

* kids: what are you doing with the bike, bud. stealing it?
E.T.: no, i just want to go out and get some milk and barbecue...

* wife: honey, i think i got into your stash again, i'm seeing our children fly without drugs (hopefully)...

* and on the next family vacation, the family went to a real black hole...

TOMORROW: Sicilian pizza from Pizza My Heart. you know what that means!: cup pepperoni!...…...hey, so Sicilian pizza is just French-bread pizza? EU for life...

Posted by the late phoenix at 3:50 PM